No Bets at Khan’s Wembley Stadium 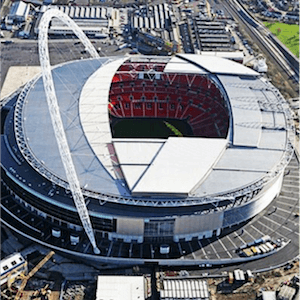 The sale plans attached to Wembley Stadium will ban betting. The government of the United Kingdom has set out its plans to forbid gambling sponsorship deals at the venue should billionaire Shahid Khan manage to purchase it. Khan, who is also the owner of the English Premier Football Club Fulham, made an offer of €600 million for the site, and the FA is likely to have reached a decision regarding the bid before 2018 comes to an end.

But Khan would not be allowed to sign a Naming Rights deal for the Stadium until 2057 because the FA is determined to protect its status as the Home of English Football.

Back in June 2017, the FA chose to cut their partnership with Ladbrokes short after they re-examined their approach to commercial deals of that type. The 2 parties commenced relations in 2017, but the FA had been facing pressure around that time to have another look at its stance on gambling company deals after the high-profile case of the Premier League’s Joey Barton.

Barton, a former England International, got handed an 18-month ban from Football after he admitted to a misconduct charge concerning his wagering activities. He was found to have placed more than 1 200 wagers on games occurring between the 26th of March 2006 and the 13th of May 2016, something that is in direct opposition to the strict rules governing gambling put in place by the FA.

Barton released a statement about how disappointed he was at the severity of the sanction, explaining that it effectively forced him into early retirement. He emphasised that the accusations had nothing to do with match fixing, so his integrity was never in question, and his appeal eventually lessened the ban to 13 months only.

In an FA board meeting that took place In May 2017, gambling-related deals were discussed, and a decision was made to bring all sponsorships with betting companies to an end. The prohibition started as the 2016/17 season drew to a close.

No Betting At Any Time, Ever

The rules as they currently stand bar FA coaches, players and referees from wagering on Football anywhere on the globe, and it was decided that the FA could not continue their association with betting companies when they had this zero-tolerance approach to punting. They agreed to keep working with Ladbrokes and other sportsbooks in sharing info on suspicious betting patterns, however, as part of a bigger project aimed at tackling match-fixing in Football.