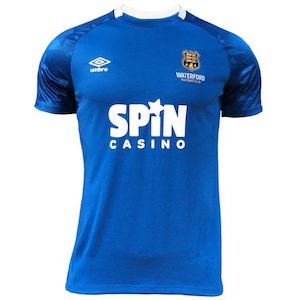 Waterford Football Club’s 2019 Umbro home jersey was unveiled in December 2018, and featured Spin Casino as the new main shirt sponsor. Along with the rest of the club’s home kit and other training products, the shirts can be bought in the official Club Shop where they sell for €65 for adults, and €55 for children. The online casino’s logo will also take pride of place on Waterford’s away jersey.

The new First Team jerseys are part of The Blues’ 2019 kit campaign, which focuses on the slogan “We Are Waterford FC”. This reflects how central the club is to the community, and how it can bring people together. Fans who want to feel even more involved can buy the shirts and other merchandise.

The new design is quite simple and clean, and is done in royal blue and white. Polyester Lightweight Micro-Eyelet fabric with a 1×1 rib has been used, to hep with comfort and performance on the pitch. The raglan sleeve graphic is a nod to Umbro’s iconic 90s kits.

Jonathan Courtney, Managing Director of JACC Sports which is the Irish distributor for Umbro, said that his company was delighted to be rolling out the new jerseys. The classic look and feel, he added, was expected to be popular with both players and supporters.

The meeting between these powerful businesses was facilitated by Waterford-based entrepreneur Chris Russell, who is also Chief Executive Officer for Thimba Media. He commented that introducing them was a pleasure, and that the partnership was a great step forward for the Football Club.

Excitement on Both Sides

Representatives for both the online casino operator and Waterford FC asserted how eagerly their employers are looking forward to working together. Head of Brand Marketing at Spin Casino, Robert Miller, said his company was “thrilled”, especially because of the team’s passion and sense of community involvement.

Tony Burke, Waterford FC Operations Manager, has commented that Spin Casino’s support is very gratifying and a “fantastic coup”. He praised the Club for their work on and off the pitch, saying that this is why they were able to attract such an impressive sponsor.

Burke went on to thank Chris Russell and everyone who had worked to bring the partnership about, as well as Jonathan Courtenay and his team for producing the home jersey. With everyone working so hard to foster a sense of achievement and community, it appears that the only direction for Waterford FC to go in is up.