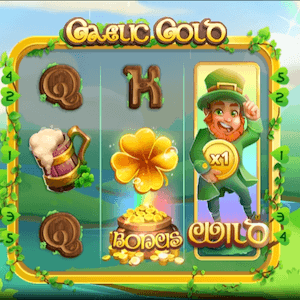 Not even two weeks have passed since the release of Nolimit City’s Barbarian Fury online slot, and already the award-winning developer is ready to debut its new Gaelic Gold game. And best of all is that the new online video slot is being released complete with a brand new xNudge experience feature.

The Valetta developer utilised an official gaming press release for the purpose of providing information about its latest slot release. The release describes the game as being charming as well as magical, and of course, right on time off the production line for the annual St. Patricks Day celebrations.

More Wins On The xNudge

How the xNudge mechanic works is that it allows players increase their wins by “nudging” stacked wilds by means of which the multiplier values are then properly increased. The mechanic ultimately leads to some pretty amazing wins.

Another great addition to Gaelic Gold is the Rainbow Spin Bonus. This is essentially the slot’s free spins round and allows players to multiply their bets by up to 9,837 times. The game’s Nolimit Bonus is well worth looking into too and players may choose to buy in on this at a nominal fee. Once activated, there are even more amazing ways to win thanks to the addition of extra rainbow lines.

Gaelic Gold follows a cultural theme along traditional Irish lines and tells a story of shamrocks and leprechauns, and with a little extra fortune smiling down, the luck of the Irish. And its this luck of the Irish that makes the slot to be what it is to Nolimit City’s Per Lindheimer.

Best Of Both Worlds

Lindheimer also commented on the slot offering to players bonuses won, as well as bonuses bought. He said that this represented to him a game capable of adapting to each individual situation and standing tall central to the experience of it all.

It certainly is a different approach to gaming to what has been the development norm for the longest time. It was almost always a case of either relying on luck or payment up – but very seldom both. Nolimit City is just about the best fit for this particular challenge and the end-result that is Gaelic Gold is proof of that.

Gaelic Gold is now available on desktop and mobile devices at casinos powered by the developer.