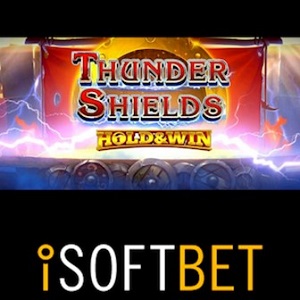 What happens when a gang of Viking warriors are bestowed with the magical powers of electricity? Why, they set off on adventures, and look to grab as much loot as possible, of course. This is the concept behind Thunder Shields, the latest slot from iSoftBet.

From the ground up, this latest slot from iSoftBet is nothing short of impressive. The graphics are amongst the studio’s best, with incredible special effects, enormous amounts of detail, and particularly dazzling animations. Each Viking character is marvellously distinct, giving the impression that an epic tale is being told, right on the reels.

In terms of gameplay and special features Thunder Shields is also a tour de force, utilising every trick in the book to keep players guessing, and keep the action fast paced.

Thunder Shields at its core utilises 5 reels and 40 paylines. But these reels can expand significantly, depending on how lucky the players is.

In terms of the slot’s base game, there are numerous special features that shake up gameplay. Colossal Respins are the most visually impressive, allowing symbols to grow enormous, and occupy up to a maximum of 4 reels at a time. Each of these massive symbol variations count as multiple matches, however, meaning that enormous payouts are practically guaranteed.

Mystery Spins, meanwhile, can be equally as lucrative. Randomly selected symbols are selected, and upon landing on at least 3 reels will stack, likewise allowing for lucrative matches to be created.

But, in Thunder Shields the ultimate payouts are earned, as would be expected based on the name, by matching at least 6 Golden Shields.

The Power Of Thunder

With 6 Golden Shields matched, the player receives 3 Hold And Win spins. It may not seem like a lot of Free Spins, but the various slots features ensure that the sequence will potentially be drawn out much longer.

During Hold And Win, the grid is populated with the initial winning Golden Shields, which will be locked in place. With each additional spin, should another Golden Shield be added, the payout will be increased.

However, Boosters may also land on the reels, which grant an advantage. A Respin Boost, Cash Boost, or Reel Boost may be added, drastically enhancing the final payout potential.

All in all, Thunder Shields is a fantastic slot, and almost certain to be hit amongst enthusiasts. Be it on desktop computer, or mobile device, the game crackles with energy, and offers an engrossing experience.