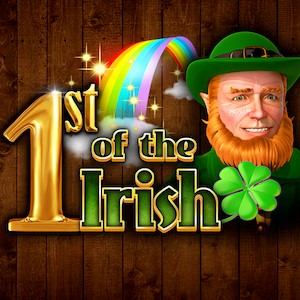 Red Rake Gaming have been very busy indeed. It’s been only a little over a week since they launched a portfolio-broad progressive jackpot tournaments toolset, and already the team is back and 100% ready for development action and debuting its new 1st Of The Irish online video slot.

Last Thursday, Red Rake employed the reach of a special new games press released informing players and fans of the latest addition to their online slots portfolio. The features certainly seem appear quite awesome at first glance, with everything from a re-triggerable symbol-specific bonus metre to a not-too-volatile 95.4% Return to Player percentage alongside various other special bonus feature-style mini-games and skits in the mix.

The story in 1st Of The Irish revolves around a mischievous leprechaun who can be seen making his way across and wondering through the beautiful meadows of fair Ireland. In order to register wins, players are tasked with filling symbol-particular special bonus metres by accumulating pipes, shamrocks, a bunch of Irish beers, rainbows and traditional green-hat Irish cultural headgear. The game makes provision for 5 of these refillable meters – one for each of the slot’s storytelling themed symbols.

Successfully filling the meters is rewarded with an entire section of varying rewards, of which multipliers applied in the shape of a special multiplier feature are distinct highlights. There are also a total of 4 sticky wilds allocated to the player who succeeds at filling the shamrock special bonus meter full-up to its brim.

Be Sure To Spot The Rainbow

The green hat meter in 1st Of The Irish is another meter to be focusing on filling to the top as this achievement carries the very special reward of up to 8 wild symbols spread out across the extent of a single reel! Just imagine the potential for wins! And then of course there’s the slot’s colourful rainbow meter that when full-up, will instantly award a particularly colourful free spins feature. This is a special free spins feature indeed as anything up to an additional reward of 500x the player’s original stake is up for grabs.

The rainbow is in fact the pilot feature of Red Rake Gaming’s latest slot. 1st Of The Irish is enticing and entertaining and potentially rewarding like nothing players have seen before. The newly-released game will appeal to most players, and can be enjoyed on desktop or mobile devices.