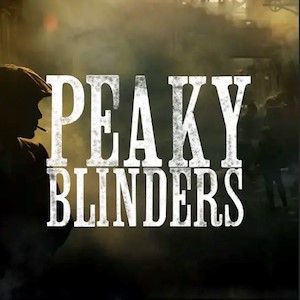 What had roughly 7 years ago started out as a wet-behind-the-ears television series based on the antics and adventures of Britain’s infamous 19th century Peaky Blinders gang, is today a smash-hit television series that has positively exploded in terms of popularity and viewership. And the best news of all is that Pragmatic Play has just released an online slot based on the immensely popular and highly acclaimed UK television series.

Much like the television show, Pragmatic Play’s online slot rendition of the Peaky Blinders story follows the adventures, exploits, and general two-timing shenanigans of the notorious Shelby family. A family historically known to have furthered their various commercial interests by way of their involvement in the gambling and betting shop industries, Shelby family members were regarded as ruthless and willing to go to great and oftentimes unsavoury lengths in order to achieve their dangerous agendas.

And what’s more, Pragmatic Play features them all on the new online slot’s reels – Arthur Shelby, the notorious Tommy Shelby, Polly Shelby, Michael Gray; you name them, and they’re bound to be found putting in a star appearance.

And if this wasn’t exciting a feature enough to keep players in suspense for hours on end, there’s also a superbly exciting Order of the Peaky Blinders Free Games feature in the mix.

In order to spin this particular slot’s feature into action, the Bonus symbol must be landed simultaneously on reels 1 and 3, along with the Order of the Peaky Blinders bonus symbol appearing during the same spin on reel number 5. The player who manages to pull this particular stunt off, will instantly find themselves rewarded with an amazing 10 free spins.

This new slot has gone live at leading online casinos powered by Pragmatic Play. Fans of the TV series are sure to love it, and those who have yet to watch it are sure to want to do so after spinning the reels.