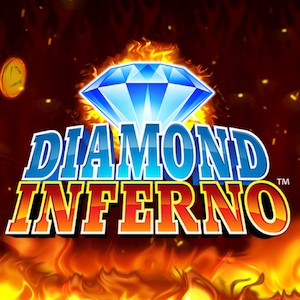 Every once in a while a slot comes along that ambitiously sets out to include just about every possible feature in its design. The resulting product has the potential to be a chaotic mess, but as far as Diamond Inferno is concerned, the result just so happens to be nail-biting, rollercoaster to experience.

Developed for Microgaming by Triple Edge Studios, this impressive creation has innovation and creativity in spades, with the designers clearly setting out to go the whole 9 yards. Diamond Inferno combines Expanding Reels, Multiplier Trials, Diamond Scatters, and a whole lot more, demonstrating that, at least as far as Triple Edge Studios is concerned, there is no such thing as going too far.

At its core, Diamond Inferno operates on a 5 reel, 3 row grid. But, that grid has the potential to get significantly larger, eventually expanding to a massive 5 reels and 6 rows. Each slot’s win awarded grants an instant respin, plus a row is added to the grid. If that wasn’t enough, the paylines also expand, with 10 more lines being granted for each incremental expansion. Paylines start at 20, but may potentially balloon to 50 at their peak.

Want more? You got it. This Expanding Reels system is accompanied by a Multiplier Trail. But in order to unlock this massive winning extravaganza, the reels and rows must first be expanded to their maximum size. But when the maximum size is achieved, that’s when things really start to get interesting.

When the 5 x 6 grid is unlocked, the slot cranks into sixth gear. Maximum size is, first and foremost, indicated by the graphics, with Diamond Inferno’s visuals impressively bursting into flames. The Multiplier Trail will then activate, each consecutive win will push the payout potential ever higher.

What’s more is that Diamond Scatters will now also begin to appear on the reels. When 3 or more are gathered, a massive bonus payout is instantly awarded.

Interestingly, there is no Free Spins feature in the game. Some may think of this as a con, but as far as Triple Edge Studios are concerned, expanding the reels for big Multiplier Trail driven wins is a fine substitute.

Diamond Inferno can be played on desktop and mobile, and it delivers a sizzling slots experience that Microgaming has become famous for.