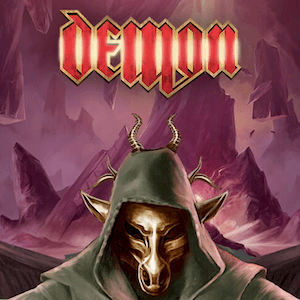 Play ‘n GO is back with yet another thrilling online slot for their players. This time, the new release is based on heavy metal music – and more specifically, a British band that fuelled the UK’s heavy metal scene from the 70s onwards. The band in question goes by the name Demon, and the new slot is called Demon as well to pay homage to the band that inspired Iron Maiden and Def Leppard.

This is not the first time that the iconic developer has released a music-inspired casino game. Play ‘n GO’s House of Doom slot made its appearance in 2018, and was an instant hit. In the latest release, players can enjoy punchy metal action across 5 reels and 3 rows.

Meet the Band On the Reels

The reels of Demon are covered in the band’s 4 most recent album covers, as well as Dave Hill, its leading vocalist. Another 10 symbols have been selected from the band’s past LPs. The slot pays out wins whenever 3 or more matching symbols line up from left to right across its 30 fixed paylines.

There are also 2 unique Wilds in this epic slot to amp up the action even further. The first is the Wild Mask, which fans of Demon’s live shows will already know all about. This Wild only lands on the centre reel, and can pair up with a Dave Hill symbol. When it does, Dave will don the mask and his symbol will act as an extra Wild for a single spin.

Then there is the Wild Amulet, which appears on reels 1 and 5 only. Pairing 2 of these amulets on those reels along with a Wild Mask on reel 3 will trigger the One Helluva Night free spins feature and plenty of tempting winning potential. Depending on where the mask appears on the reels, you could grab up to 11 awesome free spins that will be enhanced by a random multiplier value too.

While the free spins feature plays out, Wild Amulets can appear once more to trigger the even more thrilling Depths of Hell Nested free spins. There are plenty more perks and winning mechanics to benefit from in this feature, bringing you demonic wins as you listen to a soundtrack selected from the band’s iconic albums.

Additionally, you can also enjoy an innovative Jukebox Feature in the slot, which allows you to choose your soundtrack for the game. There are 9 popular Demon songs in this jukebox to choose from, so pick your favourite and get spinning at a Play ‘n GO powered online casino!