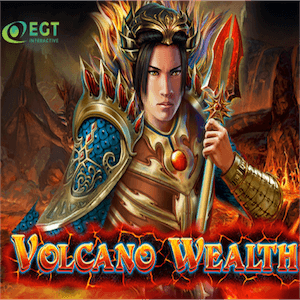 There’s a brand-new slot that’s been released from the ranks of EGT Interactive and its bound to prove a royal treat to players who enjoy adventure-style reel spinning games. But Volcano Wealth is more than just a thrilling theme; it’s a new generation slot featuring a superb 100 fixed paylines and a mini bonus-game featuring now fewer than four mystery jackpot cards. If one thing appears to be for sure, then it’s that EGT Interactive’s Volcano Wealth is not for the faint of heart.

There are wilds, there are scatters capable of triggering a phenomenal free spins bonus, and of course, as is the case with any online slot worth its reputation and gaming salt, there is a multitude of top-paying symbols capable of creating the ultimate player experience.

Behold The Power Of The Wild

The Wild Volcano symbol is the undisputed star of the show. When landed in combination with three, four, or even five other matching symbols, this glorious wild is capable of triggering anything up to a five-of-a-kind. The Wild Volcano symbol will substitute for any other symbol, with the only exception being the scatter symbol.

The scatter ranks right up there with the wild in terms of popular symbol features. The scatter is represented by the symbol of a tree, and 3 or more will trigger the free spins bonus. Anything up to a mind-blowing total of 50 free spins may be rewarded! All depending of course on how many trees the gods of slots choose to make fall on the reels during a single spin. 3 scatters will land 10 free spins in the bag, 4 scatters will do the same for an incredible 20 spins, and those lucky enough to go all out by landing a full-house arrangement of 5 scatters during a single spin of the reels, will be awarded with a champion total of 50 free games.

The game also features a classic gamble feature. This may be activated after any win awarding fewer than 3,500 currency units. Simply click on the Gamble button and make a choice between red and black. Choose wisely, as this leads to a situation of either double-your-money or a total forfeit on the win awarded by the previous spin. Risky business maybe; but without a doubt capable of adding an extra exciting spin on the proceedings.

The Mystery Card Jackpot is awarded at total random during the base game and will pop up on screen at random intervals after any win on the previous spin. Choosing three suit-matches from a selection of 12 face-down playing cards will award to the player the jackpot associated with that particular suit.

Great fun, no questions asked; Volcano Wilds is now live and available to play online and on mobile.