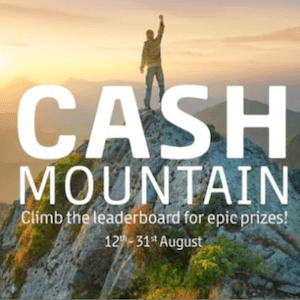 There’s good news for online Poker players. Microgaming Poker Network (MPN) has announced a brand-new cash-game summer promotion called Cash Mountain. MPN is one of the largest Poker networks in the world with thousands of players logging on every day from around the globe. In August, the Microgaming Network will be offering cash game players the chance to get their hands on some serious rewards.

Speaking to the press, Microgaming’s MD of Poker, Alex Scott said the promotion would build on the success of their most recent cash game, Leaderboard. Cash Mountain is specifically designed to reward cash game players. The company is looking forward to the game release and are confident that players will love the added incentives.

Scaling The peak Of Success

Each player can choose one of three prizes. The first is €750 in cash. If they would prefer not to take the cash there is a second option of taking a live event package worth €1500. Finally, there is the option of taking an online tournament ticket package to the value of €1550.

In order to scale Cash Mountain and climb to the top of the leaderboard, players must play a minimum of 2500 hands of stakes between €0.05 and €0.10. Playing stakes under the required amount or playing less that 2500 hands will result in non-qualification. To make the promotion fair and equal, leaderboard points will be awarded for every stake level.

A Second Chance to Win

Cash Mountain even has something for players who score negative points on any day. If players play more than 100 hands at stakes of €0.05/€0.10 or above, but still come up with negative points, they will gain automatic entry into the Daily Rub Bad Flip Freeroll. This will take place the following day at 8pm and award the top 10 finishers a cash prize of €50 each.

All in all, August looks set to be an extra rewarding month for anyone who enjoys a hand or two of this popular card game.