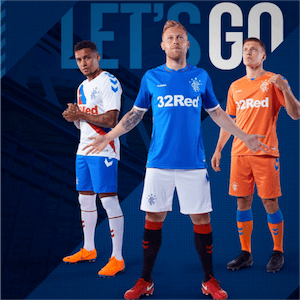 Prominent iGaming operator Kindred Group will soon be displaying responsible gambling logos on the shirts of its brand 32Red’s partnered football clubs. The measure will be implemented in the current 2019/20 football season.

The initiative is set to have responsible gaming messages dominating all major football matches in which 2 32Red-sponsored teams play against one another. The logos in question will be branded onto the shirts of the Scottish Premiership’s Rangers and English Football League Championship clubs Middlesbrough, Leeds United, Derby County and Preston North End.

Kindred’s announcement has followed a trial during the recent Old Firm Derby between the Celtics and the Rangers. It was during this event that the Rangers’ new kit featured the phrase ‘Stay In Control’ under 32Red’s logo. Derby and Leeds players will also wear shirts featuring similar responsible gaming and sports betting messages in their upcoming games.

The operator’s new initiative also covers using Kindred’s other football related assets. They include its current LED stadium advertising boards around the facility’s perimeter, which the group says have been seen by more than 8.5 million people this season alone.

According to UK General Manager of Kindred Group Neil Banbury, his team is thrilled to be launching an initiative that builds on the work it has already carried out. He said that fans would already have noticed his company’s LED boards this season promoting responsible gambling phrases, but that this is just another step for the operator.

Banbury added that every single 32Red-sponsored club has its own unique gambling message too. Derby’s kit will say “Play Responsibly”, Leeds’ will say “Keep Gambling Fun”, Preston’s will say “Never Chase Losses” and Middlesbrough’s will say “Set Deposit Limits”. According to Kindred, programme advertising, social media, emails and stadium advertising will all see a rise in responsible gambling messaging this season.

Banbury further noted that this campaign evidences the positive impact that the gambling industry can elicit through its deals with football clubs. According to the GM, gambling companies and the general industry have crucial roles to play in addressing problem gambling.

Instead of removing the industry from the public’s view, he believes that football club sponsors can do so much more through their unique relationship with adult audiences. As such, they are a great channel for advocating healthy behaviour and safe betting to the people who will be most positively affected by these messages.