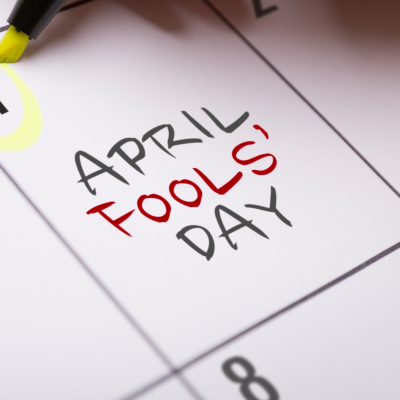 There are few regions in the world that don’t recognise April Fool’s Day, otherwise known as All Fools’ Day. In Ireland, much like the rest of the world, the occasion is marked by playing practical jokes on friends and family. The scope and complexity of an April Fool’s prank may vary drastically, but most Irish settle for the idea that a small, innocent joke gets played. Enough to get a laugh, but not enough to be disruptive.

The idea existed centuries before this, back in the 1500s, with the joke being based around a change in calendar. France made a big switch to the Gregorian calendar from the Julian calendar, which occurred in 1563. This meant, amongst other things, that New Year’s now fell on January 1st, as opposed to the last week of March.

Those that didn’t get the news still celebrated New Years leading up to April 1st and were often ridiculed for not adopting the new standard. Others decided to make an occasion out of it, thus inventing the April fish. A paper fish was pinned to the backs of those that got the day wrong, referring to an easily hooked fish. Otherwise known as a gullible person. The idea stuck and grew, and playing April Fool’s pranks became an accepted norm.

Everyone likes a good joke, though coming up with ideas can be a challenge. We found a few of our favourites that you can try out on friends and family. The first is an oldie but still a goodie. Simply change the sugar for salt at work or home, then innocently hang around in the kitchen and wait for a victim.

This one takes some effort, but is really worth the result. Most shower heads can easily be unscrewed, and a stock cube fitted inside. The next person to take a shower will get more than they bargained for. The best part is that the victim is already in the shower, and the mess will be easily washed away.

A great workplace shenanigan is to attach a post-It note to the bottom of a work colleague’s mouse so the tracking goes haywire. Be sure to write “Gotcha!” on the paper for an extra laugh.

Games To Play On April Fool’s

A great way to complement April Fool’s pranks and laughter is to play a few appropriate Irish slots online. There are plenty of reel spinning games that fit the theme, and we decided to round up a few of a favourites.

Wacky Panda from Microgaming is available now at Spin Casino. This 3 reel, 1 payline slot anomaly really is unusual in every way. It boasts some of the silliest visuals, perfect for April Fool’s Day, with a big focus on goofy pandas. Remarkably, Wacky Panda doesn’t offer much in the bonuses department, but will shell out an impressive 3,333 coin jackpot for all the highest paying symbols lining up.

While you’re at the sleek, modern Spin Casino check out the impressive Welcome Package. A total of $1,000 in Bonus Cash is available for new players. Don’t forget that the casino is also 100% mobile friendly.

Crazy Monkey from Spinomenal is available at King Billy. Even a casual glance will raise questions, namely in regard to the bizarre grid. There are technically speaking 5 reels, but some have 3 rows, and some 4. Combine this unusual layout with the interesting characters, some of which look straight out of a comic, and you have the perfect April Fool’s Day companion. Be sure to look out for the Scatters and Wilds, Parrots and Monkeys for big payout potential.

Last we have a game with a chameleon surfboarder. No, it’s not an April Fool’s joke, it’s a real game!. Available at JackpotCity, Crazy Chameleon by Microgaming revels in silliness even as it offers big payout potential. Featuring 5 reels, 3 rows, and 5 paylines there isn’t anything better than this to celebrate a day of laughing. Like the other games on our list, there are no bonus or special features to speak of, making it all about just appreciating the theme.

JackpotCity, meanwhile, blows away the competition with a $1600 Welcome Package. The first 4 deposits are matched 100% up to a maximum of $400, making the promotion as straightforward as it is generous. Don’t forget that JackpotCity Casino offers a dedicated mobile app.

This year, pull off a few April Fool’s pranks, and enjoy casino games that give you a laugh too. April 1st is a great day to enjoy yourself, although there’s no reason why you can’t do every other day of the year too!